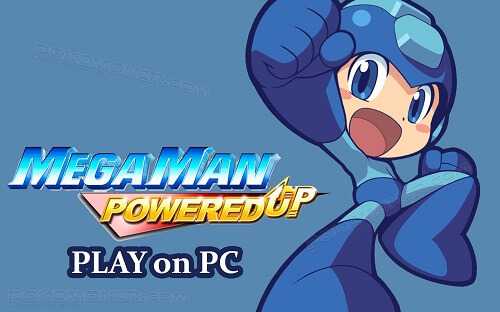 Mega Man Powered Up (known in Japan as Rockman Rockman (ロックマンロックマン) is a side-scrolling platform video game developed and published by Capcom. It was released for the PlayStation Portable (PSP) handheld game console in March 2006. It is a remake of the original Mega Man game released in 1987 for the Nintendo Entertainment System (NES). Players control the eponymous star Mega Man who must stop Doctor Wily from conquering the world using eight robots called Robot Masters. Unlike the original game, players can control these eight Robot Masters under the right circumstances. Other new features include a level creator mode and a challenge mode.

First revealed in 2005, Powered Up was produced by series mainstay Keiji Inafune. It was released in a bundle alongside Mega Man: Maverick Hunter X (also for PSP) and was slated for release on the PSP's PlayStation Network (PSN). It was released for the PSN service in Japan, but a US release did not occur due to technical difficulties. The game uses a chibi-style that was intended for the original game but was not possible at the time. The designers intended to keep this design faithful to the way the characters worked and looked in the original. While it received generally positive reviews, the game sold poorly, and plans for a remake of Mega Man 2 titled Mega Man Powered Up 2 fell through.